Posts Tagged With: learning to read 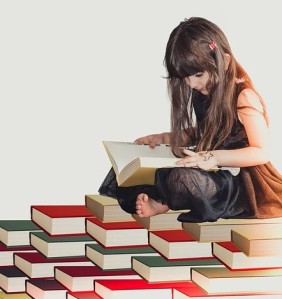 I am always baffled by articles suggesting ways parents can encourage their children to read more: Designate a family reading period and set a timer. Enroll in library summer reading programs. Have them tell you about what they read. Read the same books you want them to read and then discuss them.

Oh, don’t get me wrong. I think encouraging children to read is wonderful. If more people spent more time reading more books, the world would be a better place. Especially for authors and optometrists. But in my family, the challenge wasn’t to get children to read, it was to get them to stop reading long enough to do other stuff like chores and homework and practicing the piano.

So it isn’t the goal of encouraging reading that I don’t understand; just the strategies. END_OF_DOCUMENT_TOKEN_TO_BE_REPLACED

Okay, class. Here’s a question for you. If you think it’s a good idea to send kids back to school in the middle of August, raise your hands.

I don’t see a single hand in the air. What? You don’t think sweaty little kids, especially those lucky enough to go to school in old buildings with no air conditioning, are going to learn well when it’s 90-plus degrees? When they’d rather be at the pool or somewhere enjoying the last few weeks of what used to be considered summer vacation?

At least kids here in Rapid City don’t start school till next week. (When, by the way, we’re supposed to have the hottest weather we’ve had all summer.) But other less fortunate little learners have already been in their classrooms for a week or even two. One of my grandkids even missed the first week of kindergarten because of a family wedding scheduled for what the parties involved naively still considered to be “summer.”

Given that he’s a bright kid and enthusiastic about school, I doubt that missing a few days at the beginning of his academic journey will cause any lasting harm. Maybe he still learned to read in the second week.

I know, I know, learning to read isn’t supposed to happen that fast. Kids learn letters, and then they learn sounds, and then words, and then simple sentences. But sometimes, along the way, there’s a magical moment when everything suddenly makes sense. That’s what happened to me.

Kindergarten for me meant going to a one-room country school for the last six weeks of the spring term. I don’t remember the first day of school; I don’t remember the teacher’s name or what she looked like. But I do remember vividly the day—the moment even—that I learned to read.

The book was a thin paperback, battered and dog-eared and long out of date even then. It was one of those old schoolroom classics about Dick and Jane. The first story had pictures of Spot chasing Puff across the yard, while Dick and Jane watched. They were jumping up and down with excitement—it didn’t take much to get Dick and Jane excited—and Dick was pointing and shouting something. There were words under the pictures, and the teacher helped me sound them out. “See Spot. See Spot run.”

The language of those books has long since become a joke. Three or four generations of us could chant in parody: “Oh, oh, oh. Look, look, look. See Spot run.”

When I was five, though, it wasn’t a cliché; it was magic. Suddenly something clicked, and I was reading. The pictures told me what was happening, and the words told me what Dick was saying to Jane. Together they made up a story, and I had just read it for myself.

I hope, in between wiping their sweaty little hands on their new school clothes and making trips to the water fountain to try to cool off, little kids in classrooms all over the country get a chance to experience that same magic.