Once Upon a Different Story 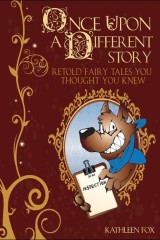 Once Upon a Different Story
is a collection of five classic fairy tales,
retold for today in the voices of:

The Big Bureaucrat Wolf, a public servant with a clipboard and an attitude.

“The guys say B. B. stands for Big and Bad, on account of I’m such a hardass in my building inspections. Most of them, they take a little cash on the side every now and then, to overlook stuff. Not me. But you wouldn’t believe some of the things I see. Like that little pig’s shack. It didn’t just violate every building code in the book; it violated logic, common sense, and the law of gravity. Hell, I didn’t even dare knock on the door for fear the whole flimsy mess would come down.”

The Murdered Giant’s Wife, traumatized by a tattooed drug dealer out of control.

“Well, of course it all started because Jack found those beans. Magic beans, you Downlanders call them, but there’s nothing magic about them, really. We all know how important the beans are to our diets and how dangerous they are to you. We all see the videos about Downlander addicts and how crazy and unpredictable they can get. So something we take seriously is bean control.”

The Fairest Queen of All, Snow White’s frustrated stepmother.

“From the beginning, I did the best I could to make friends with Snow White and love her even though she didn’t love me back. I don’t think I could have managed without the magic mirror. It couldn’t help me deal with Snow White, but at least it simplified the other major challenge of being a queen: looking fabulous. Let’s face it, looking beautiful is what princesses and queens do. Nobody wants to know what we think; nobody cares how we feel. They just expect us to show up, look perfect, and smile graciously.”

The Determined Mama Bear, coping with a tiny golden-haired home invader and the child welfare system.

“Poor little Goldie; everyone in our part of the forest knew about her. Out in the woods by herself, all hours of the day, when she should have been safe at home. And her only a little older than my Baby. Oh, I’m sure Goldie’s parents have plenty of problems of their own. Usually I’m not one to judge people if I haven’t walked a mile in their paw prints, as the saying goes. But I don’t care what their issues were—it was no excuse for neglecting that sweet little girl the way they did.”

The Softhearted Stepsister, anything but charmed by Cinderella’s anti-royal crusade.

“‘Oh my God! That’s Cinderella!’ Jane’s shriek made me drop my sociology book and focus on the television. A hunky young reporter with perfect hair and gleaming teeth was in front of the palace, reporting live on the latest demonstration from the anti-aristocracy group calling themselves “Unoccupy the Throne.” The camera zoomed in on a slender girl carrying a sign so big she could barely balance it. I could see why they chose our little sister. Even in ragged jeans and a scruffy sweatshirt, Cinderella was beautiful.”

Once Upon a Different Story is a 21,000-word book that includes five short stories. It is available in print and ebook formats.