We all know that the early bird gets the worm. Actually, from years of research comprised of occasionally noticing the behavior of robins in my yard, I’m not sure this is really true. But “the bird who is out there listening for food just after a rain or while the sprinkler is running gets the worm” is too long to be a pithy aphorism.

Have you ever watched a robin getting a worm? They yank the hapless critter right out of the ground, and yes, it really does stretch just like the ones in cartoons, and sometimes it breaks in half, which is unfortunate for the worm but just makes it easier for the bird to gulp it down, still wriggling. I wonder if it tickles. 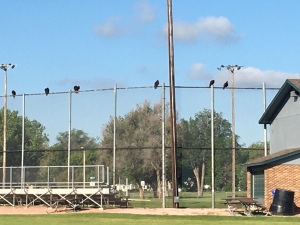 Being an early bird myself, during the summer I like to take my daily walks early in the day while it’s still cool. Not before breakfast—early is good, but so is fuel. But while the sun is still low, which in June and July can be sixish a.m.

Sometimes I walk along the bike path near my house, which passes by several baseball fields. At one of them, the tall fence along one side is lined with buzzards.

These important but unlovely big birds roost overnight in a couple of cottonwood trees at the edge of the city park just across the road, which must bring great joy to the adjoining landowners. First thing in the morning, a dozen or two of the buzzards rouse themselves enough to flap lazily across to the ball field. They line up along the top of the fence, with a few—the earliest ones, maybe?—in solitary splendor atop the light poles like cathedral gargoyles. 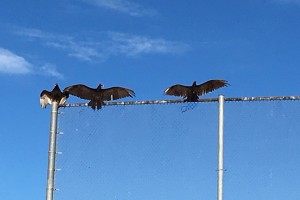 The point of this, apparently, is to catch the rays of early morning sunshine. The birds sit in a row, with enough social distance so they can spread their wings open and bask. You can almost hear them sigh with satisfaction as their sleep-stiff muscles relax and warm up in the sunlight.

Some mornings, I can relate. It reminds me of a group of friends of a certain age, sitting at a restaurant in the morning, not talking a lot until they’ve had that first cup of coffee. A little stiff, a little slow maybe, but bound to be better after some warmth, caffeine, and conversation.

But for some reason, I tend to walk extra briskly while I’m going past the buzzards. If I happen to be walking my daughter’s smallish dog, I make sure he keeps moving briskly, as well. Better safe than sorry.

I try not to think about the fact that, unlike me, the buzzards have not had breakfast yet. I appreciate that, my imaginings aside, they aren’t energizing themselves with caffeine.

But I do sometimes wonder. If the early robin gets the worm, what exactly does the early buzzard get?