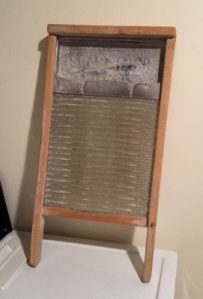 The washboard hanging on the wall of our laundry room is no reproduction, artistically distressed to look pseudo-authentic. It’s just plain old. It’s been used. The wood is unevenly bleached and stained from standing in tubs of hard water laced with harsh soap. At the bottom of the ridged glass surface, the frame is worn away in the middle, no doubt from years of scrubbing dirty overalls.

I even know whose hands must have done that scrubbing. Not my grandmother (one of my sisters has her washboard), but my grandmother’s neighbor and close friend.

But let’s not wander too far into “olden days” stories about my grandmother scrubbing clothes on a washboard for a family of 12. At least by the time my mother was old enough to notice, in the early 1930’s, washboards may have been still used for extra scrubbing, but the bulk of the laundry was done with a washing machine. First they had one with a wringer that was turned by hand—a perfect chore to assign to kids (in rotation, of course). The next one had an agitator and a wringer powered by a small gasoline engine. You can see one like it in action here.

Of course, this handy-dandy modern convenience still had to be filled with water heated on the kitchen stove and carried one bucketful at a time. Given the fumes from the engine, it would have needed to be used on the porch rather than in the kitchen. Pleasant enough in June, maybe; in January, not so much.

A generation later, my mother had an electric wringer washer like the one you can see here. Except for the much cleaner power source, it probably wasn’t hugely different from the earlier gasoline one. Filling it still meant carrying water, and the clothes still needed to be rinsed in a separate tub.

And that wringer with its double rollers was as dangerous as it was useful. Mother wouldn’t allow us to use it until we were old enough to be careful, and her unbreakable rule was to start the clothes through the wringer with a wooden stick instead of your fingers. There was an emergency bar on one side—if you whacked it, the rollers would stop turning and pop apart. As far as I know, none of us ever had to use it to save our fingers, but it was handy for those times when a wet item stuck to the roller and wound itself back around instead of going on through.

After the clothes were washed and rinsed, of course, the next step was to hang them on the line. Every now and then I hear someone rhapsodizing over the wonderful fresh scent of laundry that has been dried outside in the sun. Funny thing, though—I’ve never heard anyone do the same about laundry that has been freeze-dried outside in the middle of winter. Especially not anyone who has battled a February wind to hang up cold, wet sheets or take down towels that are stiff as sheets of plywood.

Remembering the good old days of simpler laundry technology is all very well, but I certainly don’t remember my mother having any regrets when she replaced her wringer washer with a more modern one. As for me, I’ll just keep using my convenient, efficient, un-nostalgic washer and dryer, thank you very much. Given the opportunity, my grandmothers would have happily done the same.